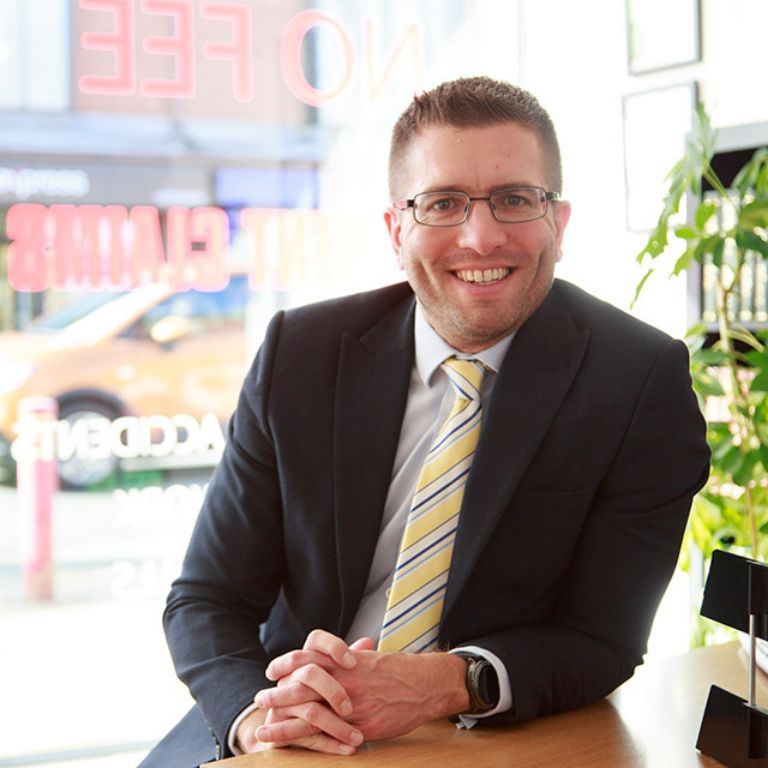 I completed my law degree and legal practice course at Nottingham Law School, before qualifying as a solicitor in 2004. I then worked at a specialist personal injury firm in the East Midlands and a leading regional firm, before joining PSR in 2017.

With PSR I've continued to specialise in acting for Personal Injury claimants and have developed a keen understanding of the procedures and tactics involved in pursuing a claim, as well as the difficulties and concerns faced by people who have suffered as the result of an accident.

Since 2014 I've been proud to help hundreds of people. I've represented the public in all manner of injury claims, including serious orthopaedic injuries, brain damage, and psychological trauma. I was instructed to deal with claims for clients in the aftermath of the Potters Bar rail crash and the Penhallow hotel fire.

In addition, I represent clients in relation to all manner of disputes. I have dealt with professional negligence claims, such as those against solicitors and builders. I have helped clients recover money which is due to them and to dispute invoices which have been sent to them. I have helped business defend claims against them. I have tackled neighbour and boundary disputes.

I live locally to the Colwyn Bay office, and outside of work, I enjoy taking advantage of the coastal and mountain outdoor activities which are available on the doorstep. I'm also heavily involved with an outdoor pursuits charity, which I find an enjoyable and rewarding way of using my free time.

We help local businesses to recover rent arrears in Chester

PSR Solicitors has recently been instructed by 2 local businesses, 1 in Wrexham and 1 in Shotton, in relation to recovering commercial rent arrears from their let properties.

In the first instance a commercial lease had been taken out on a small property in Wrexham.  The lease was set for 10 years however the tenants simply vacated the property without warning after only 18 months, clearly breaching the terms of their contract with the landlord.

We issued court proceedings against the 2 commercial tenants and, as no response was received, we were awarded judgment against them in the County Court.

We then instructed the High Court Sheriff to trace and serve the relevant paperwork and ultimately we agreed a settlement to recover our client’s lost rent in full, together with costs.

In the second instance a commercial tenant leased a small property in Wrexham to operate as a carpet shop.  Although they remained in the property they had failed to pay rent for 6 months.  This led our client, the landlord, to not only want the rental arrears but to have the property vacated.

No response was received to our initial letter and again we issued court proceedings.  Once judgment was obtained against the tenant we were able to reach an agreement with them whereby they would immediately vacate the property, leave the same in a good state of repair and then to pay the rental arrears over the next 12 months.  At the end of the same we agreed to have the County Court judgment against them removed.

In both instances we provided the landlords with a clear transparent structure for the work we would do set out in 3 separate stages and dependent upon how far along the process we got before we were able to achieve the desired outcome.  This meant that the client was fully aware of all the costs that they would have to pay and also of the timescale that the case would take.  Ultimately, both of our clients in these instances were very satisfied, not only with our procedure but with the positive outcomes we achieved.

Companies are owed tens of millions of dollars in unenforced judgments, research by litigation funder Burford Capital has revealed.

The research also found that legal costs are deterring businesses from entering disputes in the first place. Over 60% of respondents said their companies had avoided court action because of legal expenses.

Large businesses are particularly reluctant to pursue claims. More than 70% of companies worth at least $10bn in annual revenue said they had avoided legal action because of upfront costs.

The report says: ‘Paying out millions of dollars to pursue a meritorious recovery effort can be a challenge for companies with liquidity issues, but the data show that even companies with plenty of cash are likely to forgo claims due to legal expenses.’

Talk to PSR about the recovery of rent arrears

We help local businesses and landlords recovery unpaid bills and rent arrears so if you require assistance from a solicitor to assist in any business or landlord and tenant matters such as debt resolution, rent recovery or obtaining vacant possession then please do not hesitate to contact us - Commercial Rent Recovery Solicitors